The Pauli matrices are a set of three 2 × 2 complex matrices which are Hermitian and unitary.[1] Usually indicated by the Greek letter sigma (σ), they are occasionally denoted with a tau (τ) when used in connection with isospin symmetries. They are:

These matrices were used by, then named after, the Austrian-born physicist Wolfgang Pauli (1900–1958), in his 1925 study of spin in quantum mechanics. They occur in the Pauli equation which takes into account the interaction of the spin of a particle with the electromagnetic field.

Each Pauli matrix is Hermitian, and together with the identity matrix I (sometimes considered the zeroth Pauli matrix

is the observable corresponding to spin along the kth coordinate axis in three-dimensional Euclidean space ℝ3.

The Pauli matrices (after multiplication by i to make them anti-hermitian), also generate transformations in the sense of Lie algebras: the matrices

form a basis for

, which exponentiates to the spin group SU(2), and for the identical Lie algebra

, which exponentiates to the Lie group SO(3) of rotations of 3-dimensional space. Moreover, the algebra generated by the three matrices

is isomorphic to the Clifford algebra of ℝ3, called the algebra of physical space.

where I is the identity matrix, i.e. the matrices are involutory.

From above we can deduce that the eigenvalues of each σi are ±1.

Each of the (hermitian) Pauli matrices has two eigenvalues, +1 and −1. The corresponding normalized eigenvectors are: 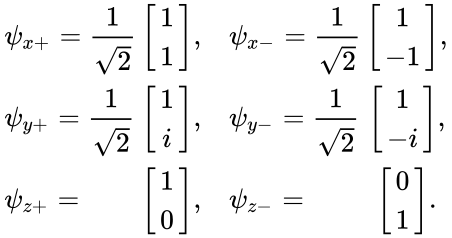 The Pauli vector is defined by 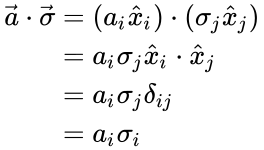 (summation over indices implied). Note that in this vector dotted with Pauli vector operation the Pauli matrices are treated in a scalar like fashion, commuting with the vector basis elements.

The Pauli matrices obey the following commutation and anticommutation relations:

is the Levi-Civita symbol,

is the Kronecker delta, and I is the identity matrix.

The above two relations are equivalent to:

First notice that for even powers

(This can be proved first for the n=1 case using the anticommutation relations.) But for odd powers

Combine these two facts with the knowledge of the relation of the exponential to sine and cosine:

Which, when we use

in the superscript, and the matrix indices as subscripts, so that the element in row

In this notation, the completeness relation for the Pauli matrices can be written

The fact that the Pauli matrices, along with the identity matrix

, form an orthogonal basis for the complex Hilbert space of all 2 × 2 matrices mean that we can express any matrix

is a complex number, and

is a 3-component complex vector. It is straightforward to show, using the properties listed above, that

denotes the trace, and hence that

which can be rewritten in terms of matrix indices as

where summation is implied over the repeated indices

. Since this is true for any choice of the matrix

, the completeness relation follows as stated above.

As noted above, it is common to denote the

. The completeness relation can therefore alternatively be expressed as

be the permutation (transposition, actually) between two spins

living in the tensor product space

. This operator can be written as

, as the reader can easily verify.

The matrix group SU(2) is a Lie group, and its Lie algebra is the set of the anti-Hermitian 2×2 matrices with trace 0. Direct calculation shows that the Lie algebra su(2) is the 3-dimensional real algebra spanned by the set {

s can be seen as infinitesimal generators of SU(2).

As SU(2) is a compact group, its Cartan decomposition is trivial.

's are a realization (and, in fact, the lowest-dimensional realization) of infinitesimal rotations in three-dimensional space. However, even though su(2) and so(3) are isomorphic as Lie algebras, SU(2) and SO(3) are not isomorphic as Lie groups. SU(2) is actually a double cover of SO(3), meaning that there is a two-to-one group homomorphism from SU(2) to SO(3).

The real linear span of

is isomorphic to the real algebra of quaternions H. The isomorphism from H to this set is given by the following map (notice the reversed signs for the Pauli matrices):

Alternatively, the isomorphism can be achieved by a map using the Pauli matrices in reversed order,[2]

As the quaternions of unit norm is group-isomorphic to SU(2), this gives yet another way of describing SU(2) via the Pauli matrices. The two-to-one homomorphism from SU(2) to SO(3) can also be explicitly given in terms of the Pauli matrices in this formulation.

Quaternions form a division algebra—every non-zero element has an inverse—whereas Pauli matrices do not. For a quaternionic version of the algebra generated by Pauli matrices see biquaternions, which is a venerable algebra of eight real dimensions.

The Pauli matrices do not commute.

The commutation relation is σiσj=2iεijkσk