The following table shows the conversions for some common angles:

Unless otherwise specified, all angles in this article are assumed to be in radians, though angles ending in a degree symbol (°) are in degrees.

The primary trigonometric functions are the sine and cosine of an angle. These are sometimes abbreviated sin(θ) and cos(θ), respectively, where θ is the angle, but the parentheses around the angle are often omitted, e.g., sin θ and cos θ.

The tangent (tan) of an angle is the ratio of the sine to the cosine:

Finally, the reciprocal functions secant (sec), cosecant (csc), and cotangent (cot) are the reciprocals of the cosine, sine, and tangent:

These definitions are sometimes referred to as ratio identities.

This article uses the following notation for inverse trigonometric functions:

The basic relationship between the sine and the cosine is the Pythagorean trigonometric identity:

This can be viewed as a version of the Pythagorean theorem, and follows from the equation x2 + y2 = 1 for the unit circle. This equation can be solved for either the sine or the cosine:

Dividing the Pythagorean identity through by either cos2 θ or sin2 θ yields two other identities:

Using these identities together with the ratio identities, it is possible to express any trigonometric function in terms of any other (up to a plus or minus sign):

The versine, coversine, haversine, and exsecant were used in navigation. For example the haversine formula was used to calculate the distance between two points on a sphere. They are rarely used today.

By examining the unit circle, the following properties of the trigonometric functions can be established.

By shifting the function round by certain angles, it is often possible to find different trigonometric functions that express the result more simply. Some examples of this are shown by shifting functions round by π/2, π and 2π radians. Because the periods of these functions are either π or 2π, there are cases where the new function is exactly the same as the old function without the shift.

These are also known as the addition and subtraction theorems or formulæ. They were originally established by the 10th century Persian mathematician Abū al-Wafā' Būzjānī. One method of proving these identities is to apply Euler's formula. The use of the symbols

The sum and difference formulae for sine and cosine can be written in matrix form as:

This shows that these matrices form a representation of the rotation group in the plane (technically, the special orthogonal group SO(2)), since the composition law is fulfilled: subsequent multiplications of a vector with these two matrices yields the same result as the rotation by the sum of the angles.

Sines and cosines of sums of infinitely many terms[]

Let ek (for k ∈ {0, ..., n}) be the kth-degree elementary symmetric polynomial in the variables 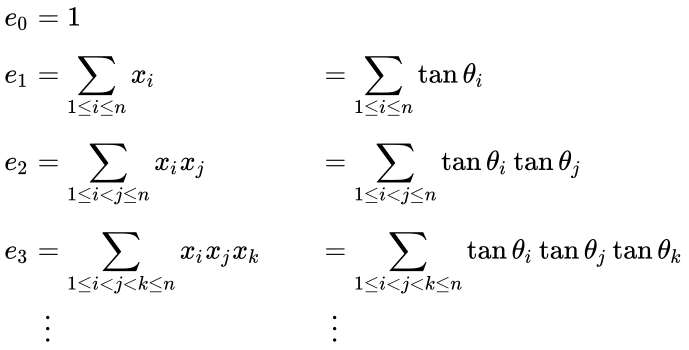 and so on. The general case can be proved by mathematical induction.[14]

Secants and cosecants of sums of finitely many terms[]

where ek is the kth-degree elementary symmetric polynomial in the n variables xi = tan θi, i = 1, ..., n, and the number of terms in the denominator depends on n.

This function of x is called the Dirichlet kernel. This is one of Lagrange's trigonometric identities.

Πρότυπο:See also These can be shown by using either the sum and difference identities or the multiple-angle formulae.

The fact that the triple-angle formula for sine and cosine only involves powers of a single function allows one to relate the geometric problem of a compass and straightedge construction of angle trisection to the algebraic problem of solving a cubic equation, which allows one to prove that this is in general impossible, by field theory.

A formula for computing the trigonometric identities for the third-angle exists, but it requires finding the zeroes of the cubic equation

, where x is the value of the sine function at some angle and d is the known value of the sine function at the triple angle. However, the discriminant of this equation is negative, so this equation has three real roots (of which only one is the solution within the correct third-circle) but none of these solutions is reducible to a real algebraic expression, as they use intermediate complex numbers under the cube roots, (which may be expressed in terms of real-only functions only if using hyperbolic functions).

For specific multiples, these follow from the angle addition formulas, while the general formula was given by 16th century French mathematician Vieta.

In each of these two equations, the first parenthesized term is a binomial coefficient, and the final trigonometric function equals one or minus one or zero so that half the entries in each of the sums are removed. Tan nθ can be written in terms of tan θ using the recurrence relation:

cot nθ can be written in terms of cot θ using the recurrence relation:

The Chebyshev method is a recursive algorithm for finding the nth multiple angle formula knowing the (n − 1)th and (n − 2)th formulae.[22]

For the tangent, we have:

Tangent of an average[]

Setting either α or β to 0 gives the usual tangent half-angle formulæ.

Obtained by solving the second and third versions of the cosine double-angle formula.

and in general terms of powers of sin θ or cos θ the following is true, and can be deduced using De Moivre's formula, Euler's formula and binomial theorem.

The product-to-sum identities or prosthaphaeresis formulas can be proven by expanding their right-hand sides using the angle addition theorems. See beat (acoustics) for an application of the sum-to-product formulæ.

If x, y, and z are the three angles of any triangle, or in other words

(If any of x, y, z is a right angle, one should take both sides to be ∞. This is neither +∞ nor −∞; for present purposes it makes sense to add just one point at infinity to the real line, that is approached by tan(θ) as tan(θ) either increases through positive values or decreases through negative values. This is a one-point compactification of the real line.)

Charles Hermite demonstrated the following identity.[25] Suppose a1, ..., an are complex numbers, no two of which differ by an integer multiple of π. Let

The simplest non-trivial example is the case n = 2:

(The first three equalities are trivial; the fourth is the substance of this identity.) Essentially this is Ptolemy's theorem adapted to the language of modern trigonometry.

More generally, for an arbitrary phase shift, we have

For the most general case, see Phasor addition.

Other sums of trigonometric functions[]

Sum of sines and cosines with arguments in arithmetic progression[27]: 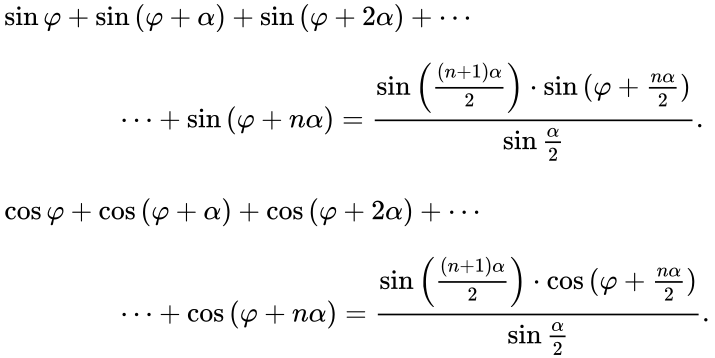 where atan2(y, x) is the generalization of arctan(y/x) that covers the entire circular range.

The above identity is sometimes convenient to know when thinking about the Gudermannian function, which relates the circular and hyperbolic trigonometric functions without resorting to complex numbers.

If ƒ(x) is given by the linear fractional transformation

More tersely stated, if for all α we let ƒα be what we called ƒ above, then

Relation to the complex exponential function[]

and hence the corollary:

is a special case of an identity that contains one variable:

A similar-looking identity is

The following is perhaps not as readily generalized to an identity containing variables (but see explanation below):

Degree measure ceases to be more felicitous than radian measure when we consider this identity with 21 in the denominators:

The factors 1, 2, 4, 5, 8, 10 may start to make the pattern clear: they are those integers less than 21/2 that are relatively prime to (or have no prime factors in common with) 21. The last several examples are corollaries of a basic fact about the irreducible cyclotomic polynomials: the cosines are the real parts of the zeroes of those polynomials; the sum of the zeroes is the Möbius function evaluated at (in the very last case above) 21; only half of the zeroes are present above. The two identities preceding this last one arise in the same fashion with 21 replaced by 10 and 15, respectively.

A lot of those curious identities stem from more general facts like the following[33]:

Combining these gives us

An efficient way to compute π is based on the following identity without variables, due to Machin:

or, alternatively, by using an identity of Leonhard Euler:

A useful mnemonic for certain values of sines and cosines[]

For certain simple angles, the sines and cosines take the form 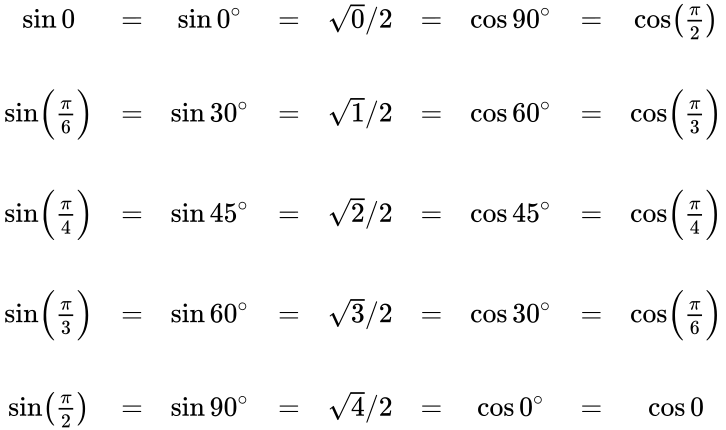 With the golden ratio φ:

An identity of Euclid[]

Ptolemy used this proposition to compute some angles in his table of chords.

In calculus the relations stated below require angles to be measured in radians; the relations would become more complicated if angles were measured in another unit such as degrees. If the trigonometric functions are defined in terms of geometry, their derivatives can be found by verifying two limits. The first is:

verified using the unit circle and squeeze theorem. The second limit is:

verified using the identity tan(x/2) = (1 − cos x)/sin x. Having established these two limits, one can use the limit definition of the derivative and the addition theorems to show that (sin x)′ = cos x and (cos x)′ = −sin x. If the sine and cosine functions are defined by their Taylor series, then the derivatives can be found by differentiating the power series term-by-term.

The rest of the trigonometric functions can be differentiated using the above identities and the rules of differentiation:[34][35][36] 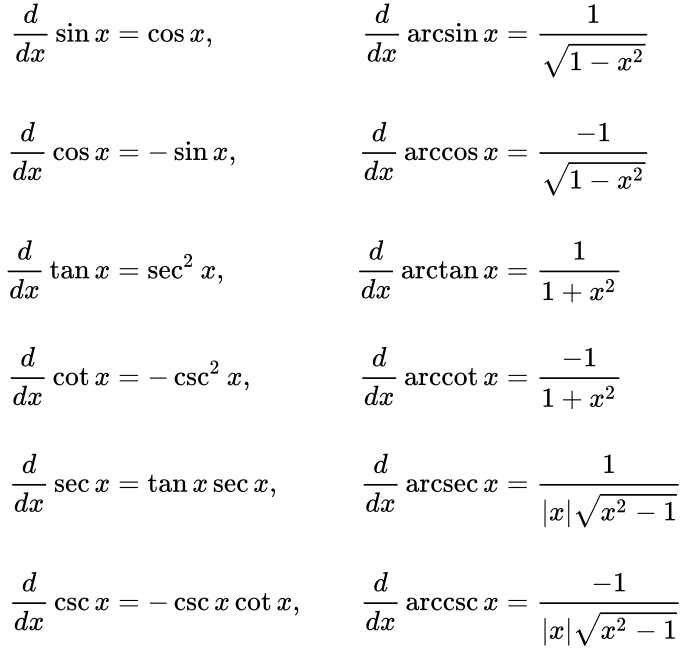 The integral identities can be found in "list of integrals of trigonometric functions". Some generic forms are listed below.

The fact that the differentiation of trigonometric functions (sine and cosine) results in linear combinations of the same two functions is of fundamental importance to many fields of mathematics, including differential equations and Fourier transforms.

The Dirichlet kernel Dn(x) is the function occurring on both sides of the next identity:

The convolution of any integrable function of period 2π with the Dirichlet kernel coincides with the function's nth-degree Fourier approximation. The same holds for any measure or generalized function.

Community content is available under CC-BY-SA unless otherwise noted.
Advertisement